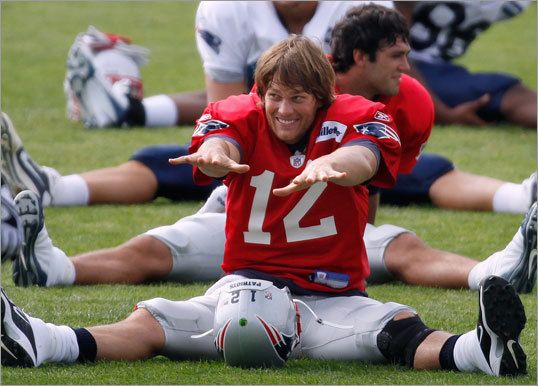 Recently Tom Brady made a comment that he could see himself playing another 6 or 7 years, which would make him 46ish by the time he hangs it up. Thanks to rule changes that make hitting a quarterback a federal offense, it’s not out of the realm of possibility that he could play until his mid-forties, but should he… short answer, no. I know that he just ended his season with an incredible comeback victory to give him and that evil genius Bill Bellicheck a fifth ring, but it’s time to call it quits. I also understand that, because of his fru fru vegan diet and insane training regiment, he doesn’t appear to be showing even the slightest signs of age but for crying out loud it’s time for him to give some of these other dudes a fighting chance. He looks like a damn GQ model, he’s without a doubt the best to ever play the game, and he has a super model wife that’s worth $360 million, what else is he trying to accomplish? Plus, doesn’t he feel the least bit bad for some of these other sad saps. Take for instance Matty Ice Ryan who looked about as useless as a screen door on a submarine in the 2nd half of the biggest game he’ll ever play in, or poor Aaron Rodgers who is constantly being dragged to another screening of his old lady attempting to act, and I’m pretty sure if Seattle doesn’t win another Super Bowl that Ciara will never let Russel Wilson past second base again. But more than anything, I want Tom to retire so that young Dakota Prescott and his literal partner in crime, Zeke Elliot, can lead my Cowboys back to the promised land!